Homes for Sale in White Rock, BC

Welcome to White Rock! Below you will find the newest homes for sale and real estate in White Rock, BC. If you would like more information on any of these White Rock real estate listings, simply click on the property, register for a free account, and you’ll have access to the full details. From there, you can click Schedule a Tour to request more information from our Loyal Homes Client Care Coordinators or schedule a viewing. Our Client Care Coordinators will be happy to provide you with property disclosure statements, past sales history, comparable properties which have recently sold nearby, and more, so please don’t hesitate to ask for help!

For your convenience, we have included White Rock community information at the bottom of the page, including directions for getting here and information about weather, culture, healthcare, recreation, schools, and the real estate market.

About White Rock, BC

White Rock, BC is a unique little city in British Columbia’s Lower Mainland region. White Rock is only around an hour’s drive to downtown Vancouver, yet it maintains a charming small-town atmosphere that has become a popular destination for retirees, young families, and those looking to retain urban amenities while living in a laid-back environment. 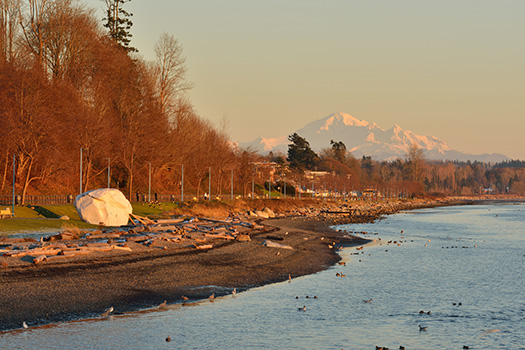 It isn’t only White Rock’s proximity to Vancouver that makes it a convenient place to call home. It’s only minutes away from the US border and is itself bordered on three sides by Surrey, allowing access to an extensive array of amenities. White Rock boasts eight kilometers of beautiful shoreline, and its beachfront atmosphere carries over to the excellent options for seafood dining in the city.

White Rock was named after the huge 486-ton boulder on the beach, used as a beacon by sailors centuries ago. Back then, this eponymous rock was kept a startling white by seagull guano, but these days the city ensures this symbol always has a fresh coat of white paint.

Getting to White Rock

White Rock is linked to the surrounding Surrey and New Westminster areas by the King George Highway, and you can easily access the Trans-Canada Highway using Johnston Road.

The White Rock Centre bus exchange is where many of the city’s buses run through. Buses may be the most convenient way to access Surrey and Langley from White Rock. Accessing Vancouver using public transit means riding a bus to Bridgeport station and transferring onto the Canada Line for a quick trip into Vancouver.

The closest airport to White Rock is in Bellingham, Washington—around a thirty-minute drive, depending on traffic. But because of the border crossing, this is typically not the most convenient way to access White Rock.

White Rock’s expansive beach access and laid-back atmosphere make it a popular and unique destination for visitors and investors alike. But another one of White Rock’s most attractive features is its weather.

The climate in White Rock is moderate. In the summertime, temperatures plateau in the low twenties, while they tend to hover in the low single digits in the winter.

Because White Rock is on the ocean but not too close to the Coast Mountains, it isn’t as foggy as other municipalities in the Lower Mainland. White Rock is also around 20% sunnier than Vancouver on average, adding up to a genuinely mild and pleasant climate.

White Rock has a rich cultural landscape, and the city’s quaint atmosphere makes it a popular hub for artists and craftspeople. One great way to engage with the city’s arts scene is to participate in the Art Walk, which offers visitors a chance to stroll along the scenic promenade while meeting artists and engaging with their works.

There are numerous opportunities to view public art within the city of White Rock. The city also puts on four festivals each year, including the Tour de White Rock, a popular bicycle race that hundreds of riders worldwide participate in every year.

Peace Arch Hospital in White Rock provides primary, secondary, and specialized services to residents, with a capacity of 171 beds. There are also several home and community services available to residents of White Rock at the White Rock and South Surrey Home Health Office.

Things to Do in White Rock

One of the most famous activities for White Rock’s residents and visitors alike to participate in is to head down to the historic pier, which was built more than a hundred years ago. It stretches out half a kilometer into the ocean and offers beautiful views of the mountains, the San Juan Islands, and fishermen bringing in the day’s catches.

An excellent way to get to know the local community during the summer months is to head down to the White Rock Farmers’ Market. Local growers supply delicious seasonal produce, and vendors offer fresh local specialties. And there’s more than shopping to enjoy at the Farmers’ Market; live music, fun activities, and great artwork all help make the Farmers’ Market an engaging and affordable activity for the whole family.

A great way to unwind in White Rock is to head to one of the city’s local breweries. 3 Dogs Brewing opened fairly recently—back in 2017—and has established itself as an excellent spot to sip a stellar beer, grab a salty snack, and socialize with friends.

White Rock features an ideal waterfront location and easy access to big-city amenities. For this reason, it’s a highly desirable real estate market. Properties along the White Rock beachfront can reach some sky-high price tags and come in an eclectic range of styles inspired by similar beachfront destinations south of the border.

In White Rock, you can find relatively affordable single-family properties on modest-sized lots. There are also options when it comes to condo developments that offer great ocean views. Altus White Rock is a condo development that began construction in 2019, and it has 126 units that range in size from around 800 up to nearly 3000 square feet.

Are you thinking of buying or selling a home in White Rock? If you’re looking to buy a home, contact our Loyal Homes real estate agents, who can answer all your White Rock community, neighbourhood, and real estate questions.

If you’re thinking of selling your White Rock, BC home, our associated Listing Realtors can provide information on recently sold comparable properties, up-to-date real estate market information, and professional tips to help you prepare and sell your house for top dollar.