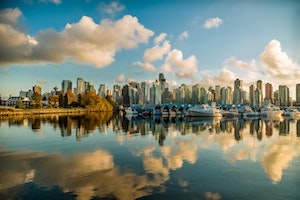 Search all Vancouver Houses for Sale and real estate listings below. Vancouver is the largest urban area in British Columbia, with multiple vibrant nightlife centers, restaurants, malls, and more! This massive urban center has an eco-friendly focus with an abundance of green spaces and hikes in and around Vancouver & the Lower Mainland.

There is something for everyone in one of Canada’s most ethnically diverse cities. Be sure to register for a free account so that you can receive email alerts whenever new Vancouver properties come on the market.

Vancouver real estate is known for being competitive and booming! This region has a wealth of opportunities and very diverse housing and commercial options. The city is divided into 23 different neighbourhoods! Depending on the neighborhood, there are single-family homes, multi-family dwellings, townhomes, and skyrise apartments! The Vancouver market can be quite demanding of buyers; the market is competitive and has high prices. 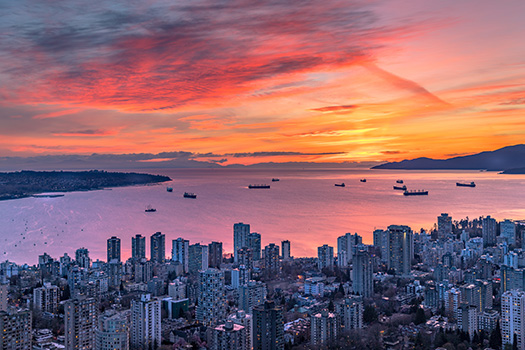 The Vancouver real estate market is touted as one of Canada's most expensive places to live. The amenities are bountiful. The culture in Vancouver is established. Vancouver is a green-focused city, and much of the real estate reflects that. City planning accounts for having an abundance of green spaces, parks, and public spaces. The city of Vancouver has a 10-year development plan to address the lack of affordable housing in Vancouver. The goal is to provide a strong foundation for affordability in Vancouver.

Vancouver has a thriving arts community, with theatres, art galleries, and music venues. It also has a film scene where Vancouver is used in many movies and tv shows. You'll find a museum of anthropology that houses many popular First Nations exhibits and many national attractions in Vancouver, like the Pacific National Exhibit (PNE), Science World, Canada Place, and Granville Public Market.

There is a diverse array of neighbourhoods that directly reflect the multicultural nature of Vancouver. Vancouver is on many ranked lists of “most livable cities” due to its high standard of living and quality of life. It is a central hub for tourism in British Columbia and is a major stop among pacific cruise lines. Stanley Park is a 405-hectare large urban park, making it 10% larger than New York City’s Central Park! Common languages here other than English are Cantonese, Mandarin, and Punjabi.

Vancouver borders many other cities, so sometimes distinguishing the borders can be unclear. The northernmost border is most obvious, being the Burrard inlet, separating Vancouver from North Vancouver. There are two main routes and bridges to North Vancouver: the Lions Gate Bridge and the Iron Workers Memorial Bridge. The aptly named Boundary road runs North/South and is the border between Burnaby and Vancouver. The Fraser River to the south separates Vancouver from Richmond, with the bridges connecting the two being Arthur lang Bridge, Oak St. Bridge, and Knight St. Bridge.

The main highway into Vancouver is Highway 1, the Trans Canada Highway. If you were to fly in, the Vancouver International Airport is actually located in Richmond on the southernmost border of Vancouver. Located a 20-minute drive away is the BC Ferries that connect British Columbia to Vancouver Island and the other Gulf Islands. The West Coast Express connects Vancouver via rail to many communities in the lower mainland. Within Vancouver, there are two separate SkyTrain systems; the Canada Line and the Translink SkyTrain network.

Vancouver is a mild, temperate climate that is the quintessential west coast experience. It's no secret that Vancouver experiences a fair amount of rain - which is what keeps Vancouver so green! Summers can reach highs of 35 °C in the summer and -10 °C in the winter. Summers experience an ocean breeze that can help make summers milder, ranging from 20 to 25 °C. Some winters go without snow, but most experience temperatures between 2 to 8 °C. These temperature patterns are what allow for the diversity of wildlife and green spaces spotted all over Vancouver.

Vancouver is known for its diversity and plethora of cultures, making a wonderful tapestry of a community. There is a significant focus on being eco-friendly and conscious and respecting indigenous culture. Vancouver is built on the unceded territories of the xʷməθkʷəy̓əm (Musqueam), Sḵwx̱wú7mesh (Squamish), and Sel̓íl̓witulh (Tsleil-Waututh) Nations.

Japanese, Chinese, Indian, and Italian are other influential cultures in this city. While these cultures can be found throughout the city, there are distinct locations to get authentic cuisine and shopping: the Punjabi Market and the 3rd most populous "Chinatown” in North America. There are also festivals like the cherry blossom festival and the Powell Street Festival, the largest Japanese-Canadian event in Vancouver.

Vancouver has many schooling options, including daycare, kindergarten, elementary, high school, and post-secondary. Vancouver School district #39 has over 110 public schools. Over 50,000 students with 91 elementary, 11 high schools, and 1 alternative school.

There is an abundance of options in education, and there is something for everyone! There are many post-secondary institutions in Vancouver, like Vancouver College, UBC (University of British Columbia), and Langara College. These schools range from trades and technical to diplomas and degrees.

Vancouver is under the Fraser Health Authority, under Coastal Health. This city contains the largest hospital in BC, Vancouver General Hospital. It is also the second-largest hospital in Canada! It is not only large but also makes the top 10 lists of hospitals in Canada. For children, there is British Columbia's Children's Hospital which is known for its expertise in serving children and youths with chronic or a-typical conditions. Service here is top quality and has state-of-the-art tech.

There are also other hospitals and countless clinics. BC Cancer Agency, Mount Saint Joseph Hospital, and St. Paul's Hospital are the main other hospitals.

Things to Do in Vancouver

What isn't there to do in Vancouver? If you can think it, you can probably do it. Vancouver has it all from cuisine, arts and culture, nature, entertainment, and sports! Vancouver's top 3 best-rated things across various rating services are Stanley Park, Granville Island, and the Vancouver Aquarium.

Stanley Park attracts 8 million visitors per year - but it is so large you wouldn't notice! There are bike rentals and bike tours, tram tours via horse carriage, and a tea house! The Vancouver Aquarium is also located here but is distinct enough to be its own attraction. It hosts over 60,000 unique aquatic creatures and a 4D experience theatre. The Aquarium has education and research programs for all ages, and many schools have field trips here! The Vancouver Aquarium/Stanley Park is a perfect whole day outing destination.

Granville Island is also an attractive entertainment option, located near the seawall. It hosts a market and many novelty shops. The food here is also stellar, like The Sandbar Seafood Restaurant. For dessert, check out Lee's Donuts! Whether it's a day trip or a small outing, there is a whole host of opportunities to choose from in the city of Vancouver.

Are you thinking of buying or selling a home in Vancouver? If you’re looking to buy a home, contact our Loyal Homes real estate agents, who can answer all your Vancouver community, neighbourhood, and real estate questions.

If you’re thinking of selling your Vancouver, BC home, our associated Listing Realtors can provide information on recently sold comparable properties, up-to-date real estate market information, and professional tips to help you prepare and sell your house for top dollar.