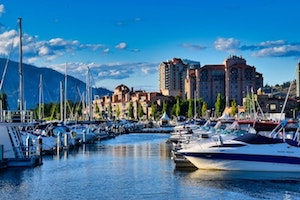 Search all Kelowna Houses for Sale and real estate listings below. Kelowna is the largest city in British Columbia's Thompson Okanagan, and the third biggest metro area in the province overall, after Vancouver and Victoria. It offers the ability to live in a sunny, scenic city—right on the shores of beautiful Lake Okanagan—with excellent access to recreational opportunities and top-notch amenities.

Be sure to register for a free account so that you can receive email alerts whenever new Kelowna properties come on the market.

Because of its weather, location, and amenities, Kelowna is a highly desirable real estate market. For that reason, like Vancouver and Victoria, real estate is expensive. It’s considered the fourth most unaffordable real estate market in the country, although new efforts to improve density and increase the housing supply are working to address affordability issues. 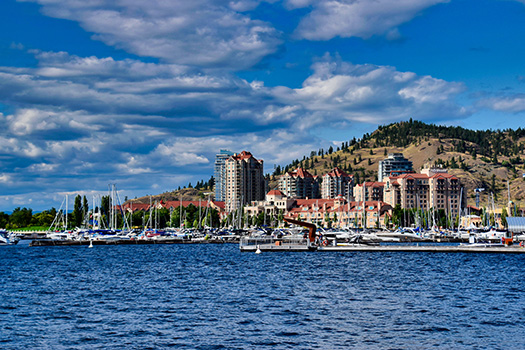 Kelowna is a large city in terms of area and offers many different neighbourhoods with different characteristics. Downtown Kelowna is a lively area a short walk from the lake. It is currently undergoing expansion, with more and more new condos and highrises popping up, likely to satisfy real estate investors looking for something new. In Downtown Kelowna, you’ll also find unique heritage houses and large, luxury waterfront properties.

Dilworth Mountain is a conveniently located neighbourhood, ten minutes from downtown and near the neighbourhoods of Glenmore and North Glenmore. Development in Dilworth Mountain began in the 1990s, and it’s mainly home to good-sized single-family homes. It’s close to schools and many amenities, making it a very family-friendly neighbourhood.

As the central hub to the Okanagan Valley—a popular tourist destination for people from British Columbia and across the world—the service and tourism industries are the main economic drivers in Kelowna. In winter months, skiing and snowboarding enthusiasts flock to Silver Star and Big White ski resorts, which offer world-class alpine conditions.

Kelowna gets frequent comparisons to Napa Valley in California because of its weather and the vineyards surrounding the city. Like Napa Valley, Kelowna is a renowned winery destination, and winery tours are a popular pastime for visitors and residents alike. Kelowna is one of the fastest-growing cities on the continent and is an exciting, dynamic market for real estate investors to consider.

Kelowna is conveniently located along BC Highway 97, which connects it quickly to the city of Vernon to the north and Penticton to the south, both short drives of under an hour when traffic conditions are good. It’s also located along Highway 33, traveling from east to west and connecting it to the Big White ski resort.

Kelowna is also easily accessible by air, using Kelowna International Airport—a twenty-minute drive from downtown. Kelowna’s airport is one of the biggest in the country and has regular flights to Cranbrook, Victoria, Vancouver, Toronto, Edmonton, and Calgary and flights to Seattle, Las Vegas, and Phoenix. There are also seasonal flights to Mexico and Cuba.

The weather is one of the top attractions in Kelowna. Summers are sunny and warm, and the city boasts of its 2000 sunshine hours per year. During the summer months in Kelowna, average temperatures are typically in the high twenties—the city is kept from getting as blazingly hot as some surrounding communities because of the moderating effect of Okanagan Lake, which also prevents winters from getting too cold.

Kelowna is also known for having some of the mildest winters in the province. Winter is typically cloudy, as the clouds are drawn in by the warm air coming off the lake, which very rarely freezes. Kelowna’s average yearly temperature of 14 degrees is one of the highest in the country.

Kelowna is home to extensive sporting facilities and hosts several tournaments and championships throughout the year. There’s a strong culture of celebrating athletics in the city, mainly geared around the Kelowna Rockets of the Western Hockey League—one of the strongest WHL teams year after year.

Kelowna is home to several art and music festivals as well. The Okanagan Independent Film Festival and the World Community Film Festival are held in Kelowna each year, and so is the Centre of Gravity Festival, a three-day music festival held at the City Park on Okanagan Lake that draws over 20,000 visitors each year.

Public education in Kelowna is provided by School District 23, which also serves nearby Lake Country and Peachland. There are six public high schools in Kelowna, as well as nearly a dozen elementary schools. There’s one Francophone school and plenty of options in terms of Christian and Montessori schools.

Kelowna is home to the Okanagan Campus of the University of British Columbia, which offers 19 graduate programs and 62 undergraduate programs. Other post-secondary institutions in Kelowna include Okanagan College, Focus College, the Justice Institute of BC, and Sprott Shaw College.

University of British Columbia’s Faculty of Medicine and UBC Okanagan’s School of Nursing are closely affiliated with Kelowna General Hospital. The hospital underwent extensive expansion and renovation that finished up in 2017 to adapt to the city’s quickly expanding population.

Things to Do in Kelowna

A beautiful short drive from Kelowna is the Myra Canyon Trestles, a can’t-miss scenic wonder. A portion of the Kettle Valley Railway, these eighteen impressive trestle bridges, and two tunnels were built by hand more than a hundred years ago and run against a canyon with steep walls. You can choose to hike along the trestles or rent a bike.

Of course, the top local attraction is likely Lake Okanagan, a massive, clean lake with warm water and more than enough room for everyone. The drive to the lake itself is also a wonderful activity, with small roadside stands selling fresh local fruit and vegetables. For excellent views surrounded by mountains and endless opportunities to partake in swimming, boating, and any number of water activities, Lake Okanagan is the place to be.

Kelowna residents are serious about their wine, and heading to one of the region’s abundant wineries is a great way to sample the local wares and spend a relaxing afternoon. Summerhill Pyramid Winery is the biggest organic winery in the country and is a great place to partake in a wine tasting while soaking up the views.

Are you thinking of buying or selling a home in Kelowna? If you’re looking to buy a home, contact our Loyal Homes real estate agents, who can answer all your Kelowna community, neighbourhood, and real estate questions.

If you’re thinking of selling your Kelowna, BC home, our associated Listing Realtors can provide information on recently sold comparable properties, up-to-date real estate market information, and professional tips to help you prepare and sell your house for top dollar.